END_OF_DOCUMENT_TOKEN_TO_BE_REPLACED

Deep Learning for RAPID classification of the transient Universe

Astronomical transients are stellar objects that become temporarily brighter on various timescales and have led to some of the most significant discoveries in astrophysics and cosmology. Some of these transients are exploding stars called supernovae, which are critical for measuring the expansion and composition of the universe. Kilonovae, a newly discovered class of transients, are the visible-light signatures of gravitational-wave sources caused by neutron star mergers, responsible for creating most of the universe's heavy elements.  With new surveys, astronomers are discovering rare, exotic, or entirely new kinds of stellar explosions, which teach us about the diverse pathways of stellar evolution and death.

New wide-field telescope surveys, such as the current Zwicky Transient Facility (ZTF), are producing hundreds of thousands of transient alerts per night, and the upcoming Large Synoptic Survey Telescope (LSST) is expected to observe tens of millions of transients, recording in excess of 20 Terabytes of images each night. To meet this demand, Daniel Muthukrishna and colleagues (Muthukrishna et al 2019) have developed a novel machine learning approach, RAPID (Real-time Automated Photometric IDentification), that uses deep recurrent neural networks (RNNs) to automatically classify transients as a function of time. Variants of RNNs have achieved state-of-the-art performance in several time-series applications. In particular, they revolutionized speech recognition, outperforming traditional methods, and have very recently been used in the trigger word detection algorithms popularised by Apple's Siri, Amazon's Echo, Google's voice assistant, and Microsoft's Cortana. Interestingly, the recording of different frequencies of sound waves as someone says "Okay Google" to their Google Home device, looks extraordinarily similar to the early part of a supernova exploding as we record it in different frequencies of light waves. The success of RNNs in trigger word detection algorithms inspired us to apply them to classifying different types of transients. They have adapted this technique to deal with noisy, multi-channel, sparse, astronomical time-series data.  RAPID is the first method designed to quickly classify transient data streams in real-time, and identifies 12 different astrophysical types. An example of a supernova explosion's brightness as a function of time is shown in the top panel of Figure 1, and the classification accuracies from our RNN-based algorithm are plotted in the bottom panel.

This strategy is well-suited to classifying these events very shortly after their explosion. This early classification allows them to alert the global astronomical community to follow up interesting transients with more detailed measurements to probe their underlying physics, before they fade away. In preparation for LSST, they have deployed RAPID to classify the real-time ZTF data stream, and it is currently classifying over 5000 extragalactic transients each night. It is enabling astronomers to make best use of their precious telescope time by prioritizing the most interesting events to follow up with further observations. 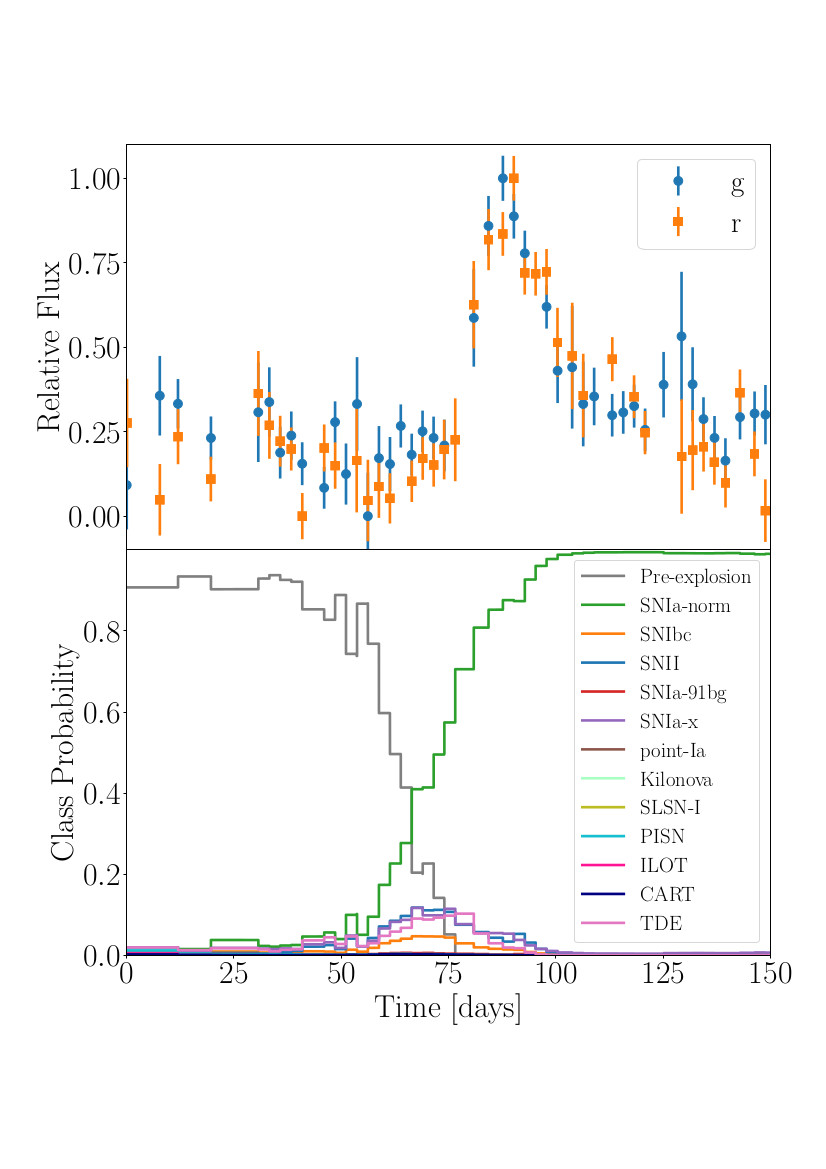 Figure: The brightness of a transient measured in two different frequencies (g and r) is shown in the top panel. The classification probabilities of 12 different transient types as predicted by our machine learning-based algorithm are plotted in the bottom panel. The correct transient type is predicted as the most probable type within just a few days of the explosion. The confidence in this prediction improves as more data is taken.