END_OF_DOCUMENT_TOKEN_TO_BE_REPLACED

Galaxy mergers are thought to drive star formation, the growth of black holes and alter the morphological mix of galaxies over cosmic time. However, while the role of mergers has been hypothesized and explored from a theoretical standpoint, a comprehensive empirical exploration remains missing. This is particularly true of mergers that have unequal mass ratios (so called ‘minor mergers’), which dominate merger activity but produce ‘tidal features’ that are extremely faint and mostly undetectable in past surveys.

LSST has the sensitivity, volume and wavelength coverage needed to perform the first uniform statistical study of mergers – including the poorly explored minor regime – using tens of millions of merging systems over at least 90% of the lifetime of the Universe (Figure 1).

Figure 1: Examples of standard-depth images (left) from the Sloan Digital Sky Survey (SDSS) and deeper r-band Stripe 82 counterparts (right) of minor-merger remnants (Kaviraj 2014). Extended tidal debris due to the mergers is visible in the Stripe 82 imaging but not in the shallow standard-depth SDSS imaging. For comparison, single LSST visits will be as sensitive as the Stripe 82 imaging and the final LSST 10-year survey will offer images that are more than 100 times more sensitive than the Stripe 82. 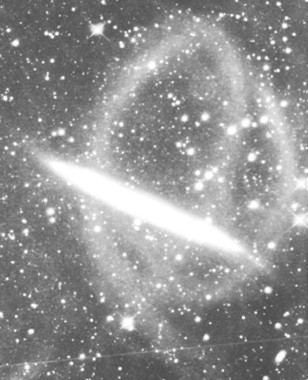 Fig 2: Faint tidal streams surrounding NGC 5907 (Martınez-Delgado et al. 2008). A dwarf galaxy  that merges with a more massive companion is stretched uniformly around in a circular stream, with a brightness that is 0.07% of the brightness of the night sky. The sensitivity of LSST will be crucial in enabling us to study these structures.